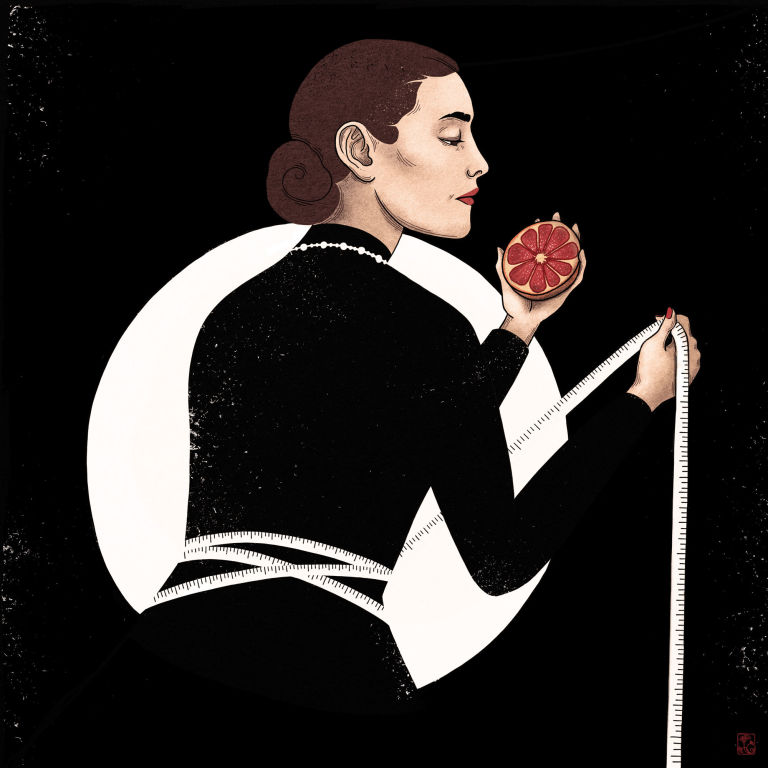 Let’s say it’s the 1920s, and you’re one of the richest and most glamorous short-story writers in America. Let’s say housewives and shopgirls pounce on everything you publish, the Communist revolutionary Leon Trotsky knows whole passages of your writing by heart, and even critics who can’t stand your work end up praising it, out of sheer admiration for the fan base. Let’s say you’re married to a dashing pianist, and that your friends include poets, novelists, movie stars, and Eleanor Roosevelt. And finally, let’s say you’re a passionately outspoken feminist who once told the press that nothing was healthier for a woman than to have a job and earn her own money.

“If feminine means dependent and weak, then the sooner they get unfeminine the better.”

Now, take a look at this newspaper article about you, an article that you cut out and sent to a friend because you were so thrilled at the way the reporter described you. “Brilliant writer?” “Courageous feminist?” “Role model for millions?” No, none of these. The reporter called you “slender.”

I’m trying to get a grip on Fannie Hurst, the prolific author of such legendary melodramas as Back Street and Imitation of Life, who turned her success at losing weight into a new mini-career and became the first celebrity dieter. Her manifesto, No Food With My Meals, appeared as a magazine article in 1926; she kept right on dieting, and eight years later, her figure had changed so dramatically that the same magazine wanted a new version of the article. She produced it quickly and then managed to publish it yet again as a hardcover book. They didn’t call it “monetizing” back then, but she was extremely good at it.

But there’s a disconnect. Why would a sharp, principled feminist decide her own body was the enemy? Fannie should have been the last person on earth to cave to some arbitrary definition of a correct female shape. She certainly had no trouble rejecting all the other restrictions imposed on women. In 1915, she marched in the New York Suffrage Parade carrying a banner that read “MOVE OVER, GENTLEMEN, WE HAVE COME TO STAY.” She was a charter member of the Lucy Stone League, named after the abolitionist and suffragist who refused to take her husband’s name. And she was one of the lucky feminists invited to join Heterodoxy, an uproarious Greenwich Village luncheon club described by the labor activist Elizabeth Gurley Flynn as being for “women of the future, big spirited, intellectually alert, devoid of the old ‘femininity.'”

In fact, all the progressive issues of her time were hot buttons for Fannie. She spoke out on pacifism, workers’ rights, racism, poverty, and, as early as 1935, Hitler. What’s more, she wove these issues into her books. Lummox, her second novel, was written from the perspective of one of society’s throwaways — a hardscrabble servant named Bertha, whose labor keeps her employers well-housed and well-fed although she earns only condescension, humiliation, sexual assault, and a bare-bones wage. “There’s nothing right about the way the world’s run nohow,” shouts Helga, one of Bertha’s fellow servants. “Those that got the drudgery to do get the hard beds to sleep on. Those whose bones are rested from easy living get the soft beds — where’s the right of it, I ask you?”

Why would a sharp, principled feminist decide her own body was the enemy?

Yet even while Fannie was composing this howl of female outrage, she dreamed of a different body. She was about 5’6″, a stocky Midwesterner who had been an eleven-pound baby, a chubby toddler, and a plump teenager before climbing to an adult weight of 185. She did love food. In the diet book, she looks back longingly at the huge breakfasts she was raised on: “Oatmeal in a covered dish was served out with plentiful additions of butter, sugar and yellowish cream. A platter of bacon and eggs. … Toast or hot biscuits or both … hominy or grits or stacks of griddle cakes with apple jelly or molasses. Coffee and plenty of it … and, more often than not, crumb coffee cake, still hot, and thickly sprinkled with cinnamon and sugar.”

Dieting was becoming a national fetish when she discovered it in 1922, at the age of 37. Until then, she hadn’t worried too much about her size: she was wealthy enough to rely on an exotic wardrobe of draped and swathed fashions that hid her shape. But the ’20s ushered in narrow-cut clothes and boyish figures, so she started taking long walks and exercising at home. She didn’t change her eating habits, though, until the day she went out to lunch with a “slim and lovely” friend. As the waiter set down Fannie’s first course, a bowl of cream-of-celery soup, her friend began to nibble at her entire meal, which was an order of plain spinach. “I died that day,” Fannie wrote in No Food With My Meals, “of shame.” She studied up on the new science of calorie-counting and launched a meager diet:

Lunch: 3 ounces of lean meat and a pile of leafy vegetables

Dinner: the same as lunch

Not surprisingly, it worked. A little protein, low glycemic index — celebrities still promote diets like this. Like millions of women before and since, she fell in love with the way the pounds dropped off and decided to eat even less. Revised diet:

Breakfast: half an orange and black coffee

Dinner: 3 ounces of lean meat and a pile of leafy vegetables

Fannie adored her new body and everything that came with it — the compliments, the clothes, the camera-ready public image. She understood that she could no longer consider appetite a pleasure, that she had to approach every meal as a battleground on which there was no such thing as a cease-fire. But she was willing to live that way. Borderline anorexia wasn’t a concept anyone discussed in her day, but Fannie may have been a pacesetter here, too. Ultimately, she lost 40 pounds and kept most of them off for the rest of her life.

Maybe it all comes down to the oldest trauma in the old, old story of women and their bodies: a surge of shame so powerful it was enough to fell even the mighty Fannie Hurst. The second-oldest trauma may have been a factor as well. Around the same time as that fateful lunch, according to Brooke Kroeger’s biography Fannie: The Talent for Success of Writer Fannie Hurst, she happened to meet a “lean and rugged-faced” Arctic explorer named Vilhjalmur Stefansson, and the two began an affair. (Apparently, Fannie’s marriage rolled along unimpeded. She once told the press that a relationship based on trust and a bit of open space was going to be far livelier than one based on the stereotypical “good-wife-and-mother.”) Meanwhile, the passion for “Stef” cooled down in time, but the angular figure and the harsh relationship with food were permanent.

I wish they hadn’t been. I can understand Fannie’s yen for drastic weight loss as she embarked on a midlife love affair. But I wish she had been able to temper her vigilance just enough to become a role model for how to eat rather than how to diet. To her credit, she wished the same thing. She understood that by glamorizing a victory over the pleasure of food she was luring readers into dangerous territory; she tried to get them to look critically at the unrealistic images of femininity all around them. “More and more, today’s standards of American Beauty are being set up and authorized by the bizarre little so-called civilization known as Hollywood,” she warned in No Food With My Meals. Normal-sized women in good health were no longer considered desirable; instead there was only “the slimmed, the irritable, the hungry woman. … She does not add to the gaiety of the nation or of the home; she is no healthier, she is prettier only according to the frail standards of a papier-mâché city on the west coast …”

This admirable sermon counted for little, however, compared with Fannie’s sleek and much-photographed new shape. Celebrity diets have a peculiar life of their own: the celebrities may speak sensibly, but the diets demand lunacy. Oh, Fannie, how could you? You were one of the most delightful and unapologetic feminists of your day, and we need you in the pantheon, but living on lettuce was a terrible idea. Maybe what we have to love you for is your honesty. You never pretended that dieting was fun, and you never implied that being skinny made you morally superior. I’m also mindful that you were never photographed smiling tenderly at a seaweed smoothie. Welcome to the pantheon, Fannie — just don’t bring your lunch.

Laura Shapiro is the author of What She Ate: Six Remarkable Women and the Food That Tells Their Stories.

REVIEW: The History Center in Tompkins County: New Book on the Role of Men in the Suffrage Movement