As Playboy Bunnies with Different Tales: Barbara Walters and Gloria Steinem as the Feminist Revolution Was Just Getting Underway 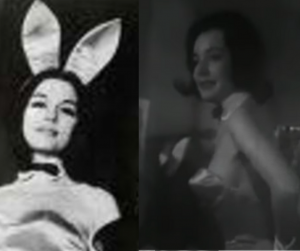 Gloria Steinem (left) and Barbara Walters in 1962 and 1963, dressed as Playboy Bunnies.

Amid the outpouring of gratitude and deep respect expressed by TV newswomen and other top woman journalists at the death of Barbara Walters, a sixty-year-old NBC The Today Show segment circulated on social media. It is far less remembered than Gloria Steinem’s “A Bunny’s Tale,” reported soon after Walters did her turn. Steinem covered the same ground but the contrast between the two approaches could not have been starker, especially given that both efforts appeared on either side of Betty Friedan’s consciousness-raiser, The Feminine Mystique, and passage of the federal Equal Pay Act of 1963, which, in time, would become an essential instrument in improving conditions for women in US-based jobs outside the home.

“I was no Gloria Steinem,” Walters once told Elle magazine. To Oprah she said the president of NBC responded “not enough interest” when she pitched the women’s movement. The disparate takes of Walters and Steinem on what it meant to be a Playboy Bunny late in 1962, early in 1963, point up how confused the times were as feminism’s second wave began its grand swell.

In the Walters segment, we see her, then thirty-three, at Playboy Bunny School soon after the opening of the Playboy Club in New York City. She talks with the matron, goes through the training manual, and submits to a costume fitting, replete with the attached cottontail and handy pen for taking drink orders. She chats with a pair of seasoned hires as they endeavor to teach her the “Bunny Dip,” the graceful straight-back, bent-knees debutante’s maneuver that saves the Bunnies from having to bend immodestly over a cocktail table. “It’s like a ballet movement,” Walters observes, as she attempts to gain mastery. She even does a turn waiting a table in the requisite Bunny high heels, intentionally sized up, although this did not stop her feet from feeling awfully sore.

Walters comments on how Bunny costume provides more coverage than what women were wearing at the beach. She offers in a voiceover that when she left the club ahead of the Bunnies on duty, a doorman mistook her for one of them. “I’m not a Bunny,” she reports telling him with a note of defiance. “I’m a reporter.” On the Today set, she gives the side-eye to the host, Hugh Downs, when he comments—twice—on how cute she looked in the outfit and how much he enjoyed the view, but she also confesses that the doorman’s misidentification left her secretly “kind of pleased.”

Downs opines on the tastefulness of clubs—”depressingly moral” —is the phrase going around, he says, “no hanky-panky going on.” He thought they were getting an undeservedly bad wrap.

Two months later,* Gloria Steinem, just before her 29th birthday, went through the same paces, in her case, not for a frothy pro-Playboy Club defense. On assignment from Show magazine, she went undercover to investigate if and how exploitative Playboy’s Bunny policies were toward the young women the company employed to ornament their clubs. Her reporting appeared in journal form in Show‘s May and June issues in 1963. You can read the two-part series here, at undercoverreporting.org.

Steinem, for years, regretted having accepted the assignment. It brought no new meaningful work 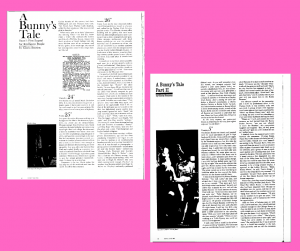 and far too much unwelcome attention. But later on, as she recalled in her memoir, she began to appreciate what the series accomplished—for example, her exposé stopped Hugh Heffner’s staff from physically examining the young women they hired—and she took pride in knowing that her story had “outlived all the Playboy Club both here and abroad.”

*Steinem’s journal entries of “Saturday, the 26th, and Tuesday, the 5th” almost definitely means her reporting took place in late January and early February 1963, which are the only corresponding days and dates in all of 1962 and 1963. The Walters segment aired December 31, 1962. The Feminine Mystique debuted February 17, 1963, and the Equal Pay Act passed June 10 of that year.