What a lot of digging will do.

Dr. Nosty explodes understanding of the presence of women in war reporting before World War II. It was not just a few. Of the 183 he mentions—the customary figure is about a dozen—some 35 carried US passports, among them Martha Gellhorn and her travel-and-reporting buddy, Virginia Cowles, both of whom Undaunted gives considerable attention to, and Frances Davis, later Frances Davis Cohen, who has the unlikeliest story. Gellhorn and Cowles spoofed their experiences in Spain and during World War II in a play they wrote—Love Goes to Press—

that had a fine run in London but flopped on Broadway, although there have been subsequent runs as recently as 2012. Gellhorn maintained that nothing in the play was true, that she and Cowles made it all up whole cloth. And yet much of it, to latter day woman journalists, rings strikingly familiar. Sarah Watling’s new book, Tomorrow Perhaps the Future: Writers, Outsiders, and the Spanish Civil War, is coming out in May. 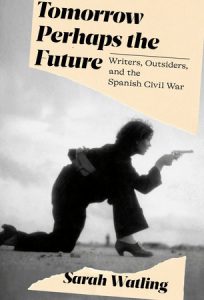 It’s a remarkable book, too, which I read in galleys and offered the following comment to her US publisher, (Undaunted’s too), A.A. Knopf:

“Tomorrow Perhaps the Future offers an intimate and nuanced exploration of what animated and sustained a group of prominent foreigners who took sides in the mortal ideological struggle against fascism that was the Spanish Civil War. Sarah Watling tells of the harrowing battles, the destruction, and the death, but also of the thinking of her subjects, their passions and convictions, their bravery and ambivalence. Such an intriguing read.”