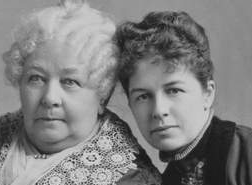 On Thursday, August 24, 2017, in East Hampton, New York, more than 150 women and a few proud suffragents, almost all dressed in white, gathered on Main Street to re-enact a 1913 suffrage rally, organized this time by the League of Women Voters of the Hamptons and spearheaded by the organization’s vice president, Arlene Hinkemeyer. 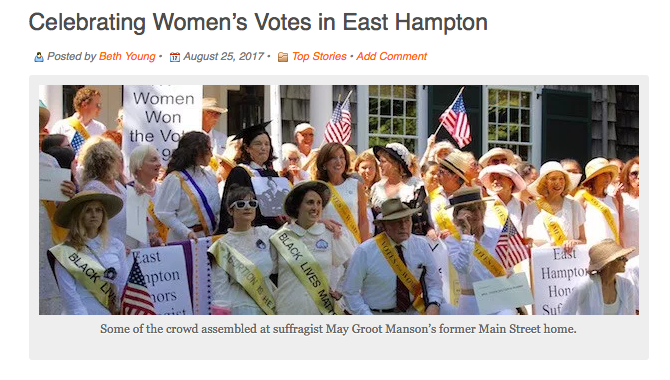 And, for good historical measure, here is the coverage of the original rally as it appeared on page 5 of the weekly East Hampton Star of August 29, 1913. 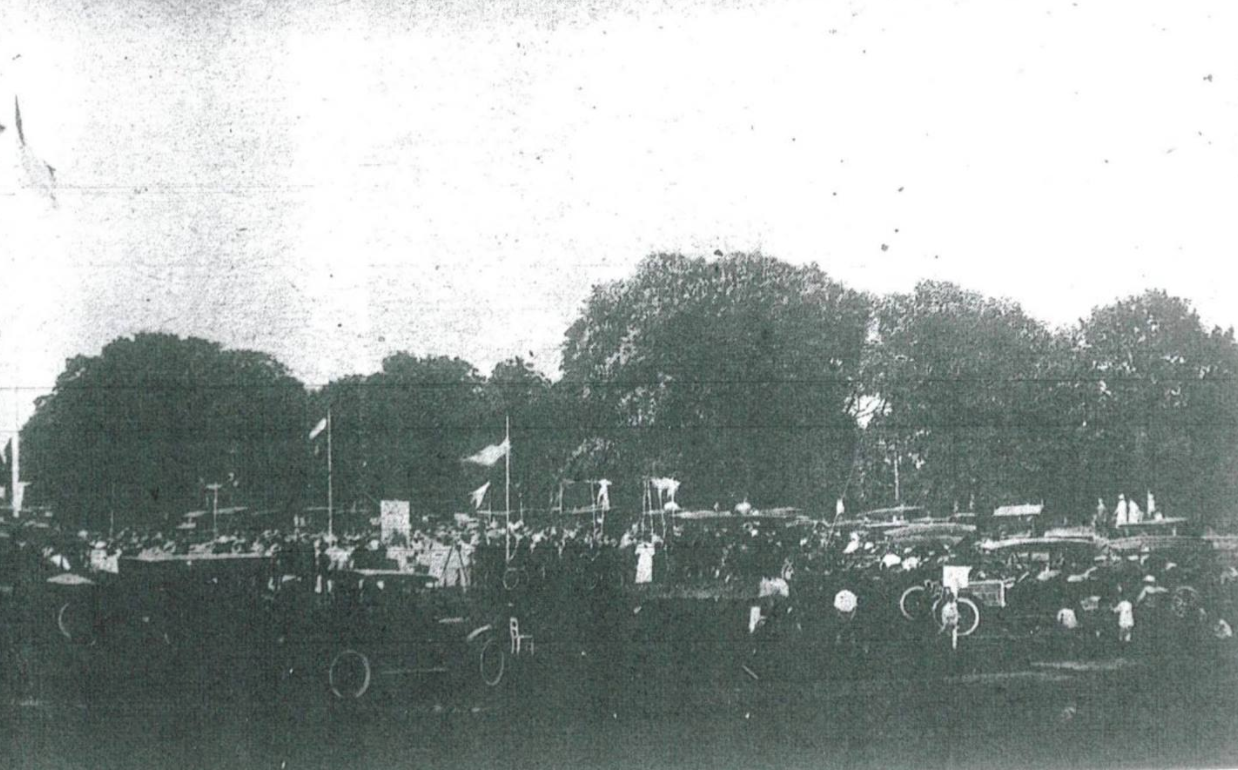 You’ll note that among the important guests at the 1913 event was Harriot Stanton Blatch, who was president of the Women’s Political Union at the time and the daughter of movement founder Elizabeth Cady Stanton. Blatch was an important suffrage movement force in her own right, and remained so throughout her adult life, first as a member of the National American Woman Suffrage Association and later in Alice Paul’s more militant Congressional Union.

The re-enactment of 2017 also had honored guests from afar, including the chair of the New York State Suffrage Commission, Lieutenant Governor Kathy Hochul. I taped her fine remarks and posted them here:

Also present were  Coline Jenkins and Elizabeth Jenkins-Sahlin, the direct descendants of Blatch and Stanton. 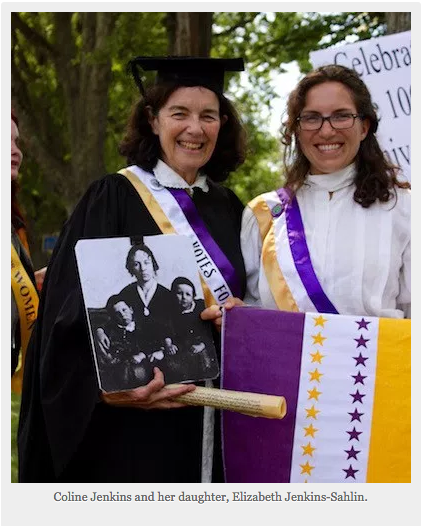 At home, we had the privilege of hosting the Jenkinses for what turned out to be a delightful talkathon of all things suffrage during their brief 15-hour stay, some short portion of which involved sleep.  Pictured just above are mère et fille as they appeared during the parade down Main Street and afterwards at the East Hampton Library, where Coline Jenkins regaled the crowd with stories from her illustrious heritage.  She wore the cap and gown as homage to her great grandmother, Blatch, as the suffragist often appeared at rallies and parades. She’s easy to spot in this one: 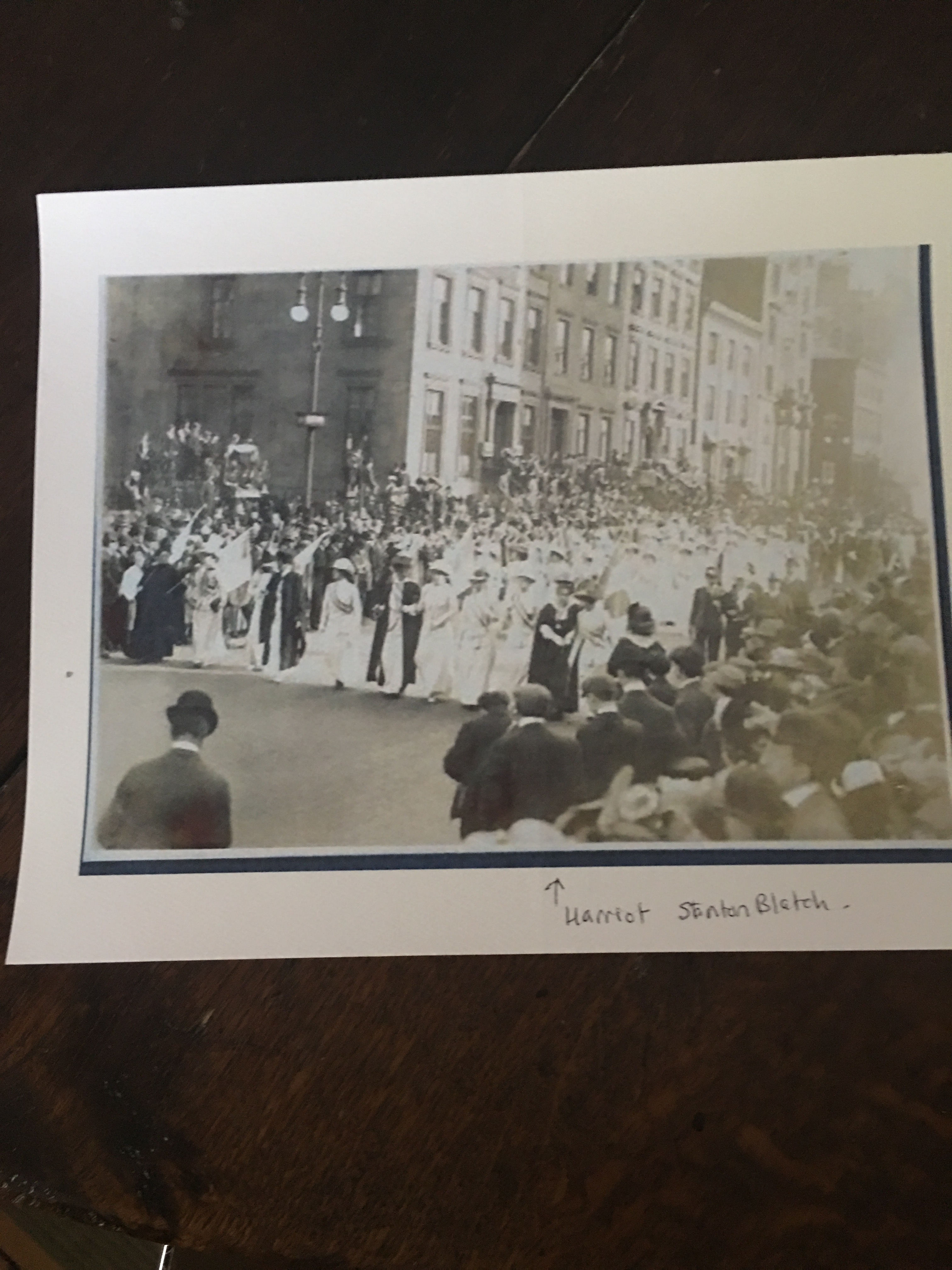 In the photo of the Jenkinses above, Coline is holding a more youthful photo of her great grandmother and Elizabeth is holding a replica of the Ratification Flag, which was  created to denote each of the 36 states that ratified the Nineteenth Amendment to the US Constitution. Paul is shown here sewing on the final, Tennessee, star that made measure law. 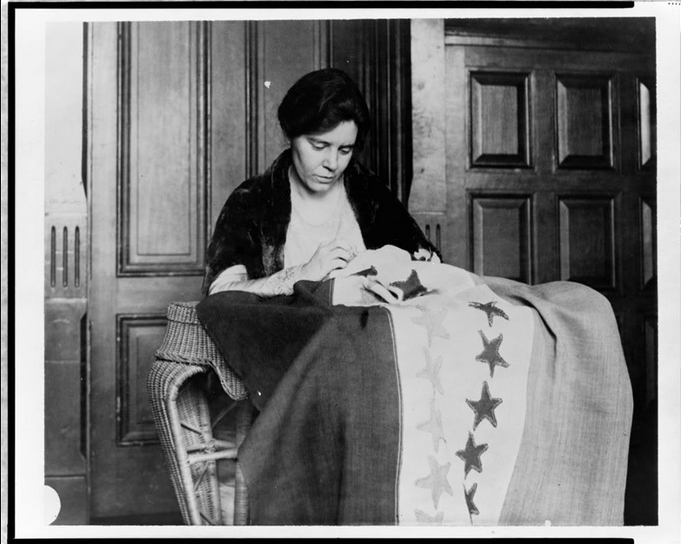 To our house, Coline Jenkins brought hostess gifts, all women’s rights-themed, of course. On learning that my book, The Suffragents, launches on Friday, September 1st at the East Hampton Library, she graciously presented us with the flag, so that it could be displayed at the event. And so we will.

The Jenkinses presented us with more good suffrage loot, too: a kitchen towel that puts cooking and cleaning in its rightful place and a jailhouse pin replicating the ones worn by suffragists who had endured prison sentences for their actions as protesters. In a more contemporary vein, we got a pink pussy hat ( In keeping: I’m part of a panel on Saturday, October 14 at the American Journalism Historians Association conference in Little Rock, Arkansas, organized by Jane Marcellus and titled, “From Pant(aloon)s to Pussyhats:Feminist Dress as Media Spectacle“). 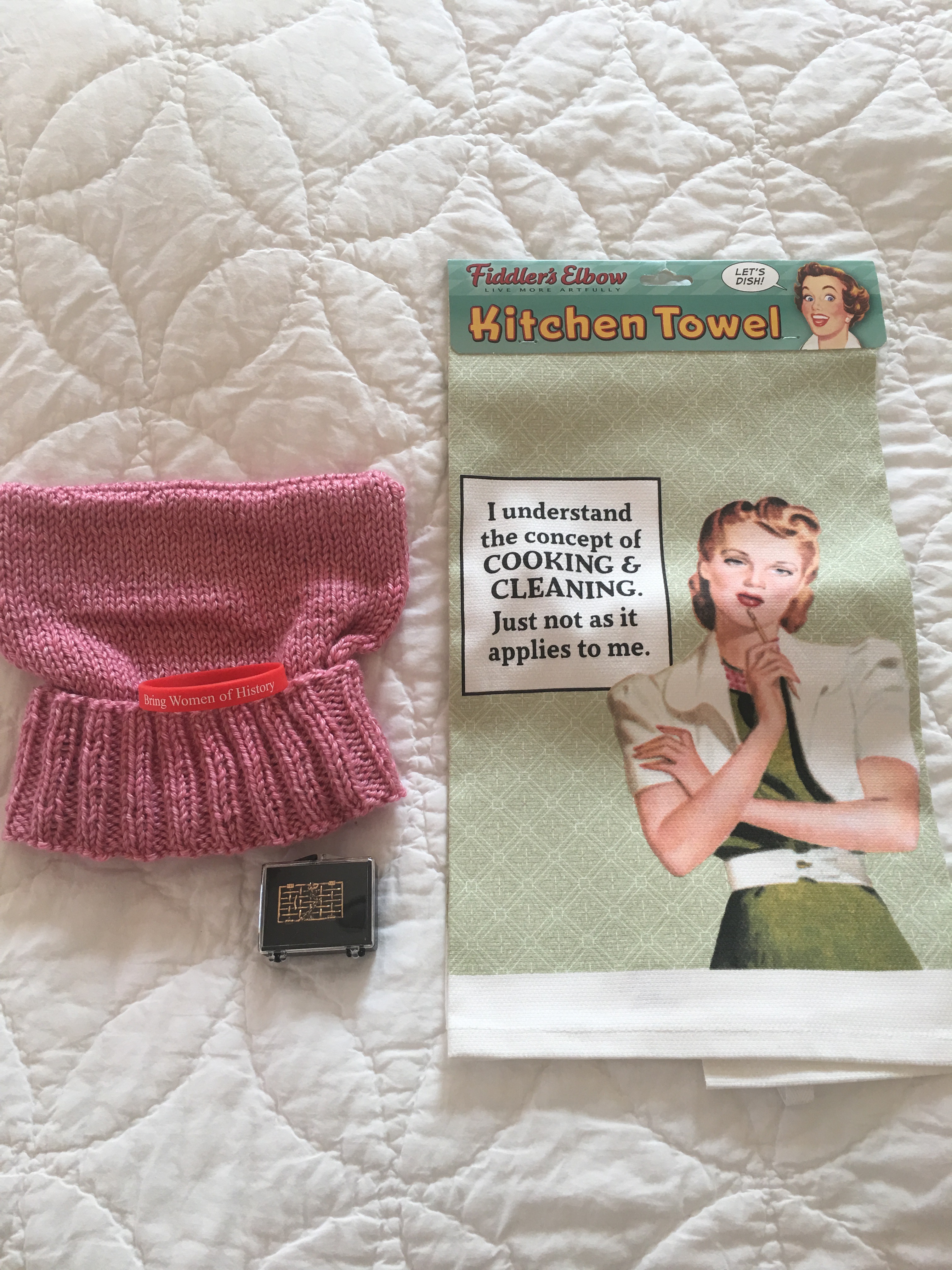 Stanton, of course, died October 26th, 1902, a good seven years before my suffragents, better known as the Men’s League for Woman Suffrage, came into being in November of 1909. There had been, however, an earlier attempt of men to organize in 1874-75 called the Young Men’s Woman Suffrage League. Before it fell out of existence and memory, the group met eighty times at Plimpton Hall on Stuyvesant Street in what is now the East Village. 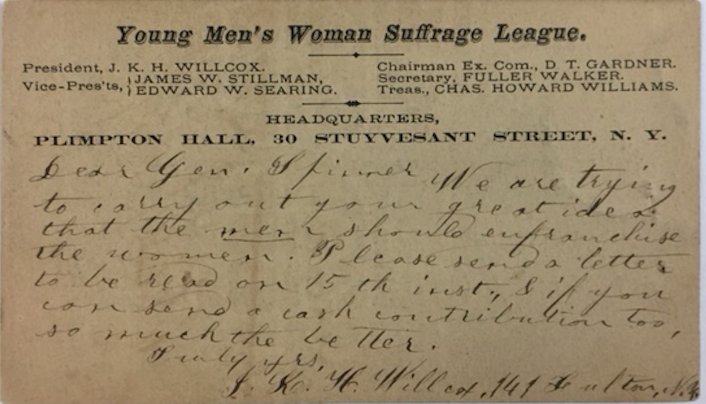 The postcard above, is signed by the earlier league’s president, J.K.H. Willcox, and addressed to General Spinner, likely General Francis E. Spinner, the US Treasurer from 1861 to 1875, who had expressed support for women’s suffrage. Thanks to Kenneth Florey for permission to reproduce it from his collection and beautiful 2015 book, American Woman Suffrage Postcards.

When Oswald Garrison Villard, editor and publisher of the Nation and the New York Evening Post, proposed the creation of the league in late 1907/early 1908, Anna Howard Shaw responded that NAWSA had steered clear of the idea because the right men—those who could do the movement the most good—never seemed to have time or willingness to come forward. Villard assured Shaw that he could help produce the right names, those with influence in Albany, provided he could find someone else—a man, as he believed the organization needed to be separate from NAWSA—who would do the organizational work.

Blatch, too, figures at least tangentially but importantly in the creation of the Men’s League of 1909. As Villard’s designate, Max Eastman, busily did the work of recruiting for the League at least 100 prominent, influential men from across New York State, Blatch enlisted the philosopher John Dewey and Rabbi Stephen S. Wise, to join the Equal Franchise Society, a parallel group led by the socialite Katherine Duer Mackey. Dewey and Wise are both in the founding triumvirate of the Men’s League, too. Both groups represent NAWSA’s strategy in the second decade of the 20th century to broaden the pro-suffrage ranks to include New York’s recognized elites. Both were successful. The March 1909 Harper’s Weekly puff piece just below (Norman Hapgood was the publisher and also a member of both groups), explains the Mackey group’s purpose.

And not long after, on May 21, 1909, the New York Times published a front page scoop on Eastman’s recruitment efforts. The Times was respectful enough of the city’s cultural and social paragons to be somewhat restrained in its mockery (“The Deeper Notes to Join the Soprano Chorus for Women’s Votes”) but there was no such consideration for the women’s suffrage movement. The Times was decidedly anti-suffrage in its editorial stance. Eastman reports that the article so embarrassed Dr. John Brannan, the president of the board of trustees of Bellevue Hospital, that he withdrew his name from the Men’s League’s membership roster as soon as he read the morning paper. He later re-upped. Brannan was the husband of Eunice Dana Brannan, an important suffrage figure in the Paul wing and the daughter of New York Sun publisher, Charles Dana. The Times scoop still makes for amusing reading:

[Added August 5, 2017: Here is the coverage of the rally as it appeared the following Thursday, August 31, 2017, in the East Hampton Star with this Durrell Godfrey photo on the front page: 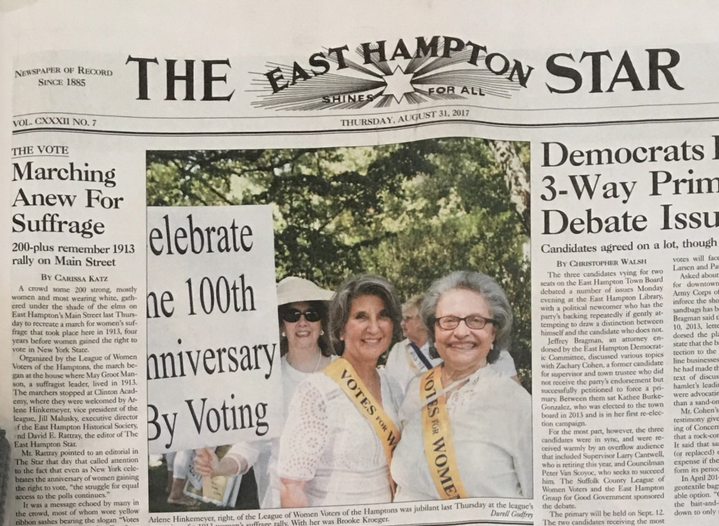 Inside there was notice of my “Author’s Talk” the next day at the East Hampton Library, which was the publishing day launch event for The Suffragents: How Women Used Men to Get the Vote. All the details of that fun night are here.]

So many of the roads to suffrage—and to its centennial commemoration—intersect.

Here is LTV’s March 2018 recap of women’s rights activity on the East End over the years and I’ve added a screenshot from the video of the summer 2017 march. 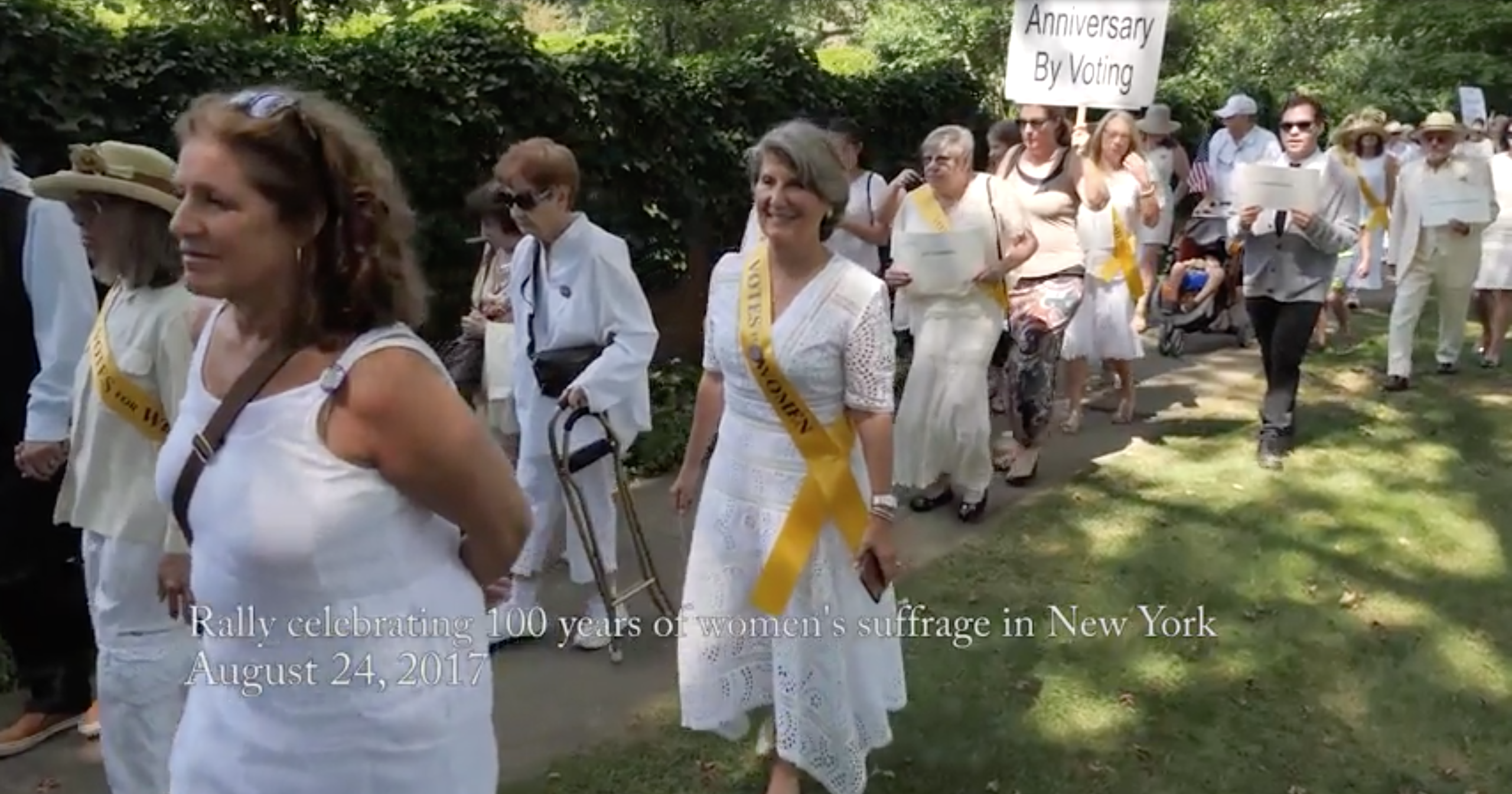