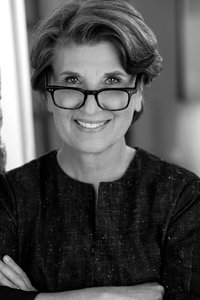 Author of THE SUFFRAGENTS
Interviewed by Megan Labrise on August 31, 2017

In anticipation of the 19th Amendment’s centennial celebration, Brooke Kroeger wanted to write a book about women’s suffrage. But the typical topics in the fight for voting rights seemed wrong.“I always look for something that nobody’s done,” says Kroeger, author of several nonfiction books, including Undercover Reporting: The Truth about Deception and Nellie Bly: Daredevil, Reporter, Feminist. “I’m not great enough to redo something. I’d rather stake the territory. My strength is digging in beyond where a lot of people are willing to go.”

Kroeger is an investigative journalist and director of Global and Joint Program Studies at NYU’s Arthur L. Carter Journalism Institute. She frequently writes about women and media.

Counterintuitively, a cursory investigation into women’s suffrage led her to contemplate the contributions of men.

“The men were the voters, the men were the legislators, the men were the executive leaders at both the state and federal level,” says Kroeger, whose research ended up focusing on a critical decade in suffrage history, the 1910s. “I started to ask myself, how could they [the women] possibly have done this without help from the men?”

The Suffragents: How Women Used Men to Get the Vote is the previously untold story of the Men’s League for Woman Suffrage, an organization founded in 1909 by 150 wealthy captains of industry, media, finance, and commerce. They used their fame, funds, and connections to advance a social justice movement from which they did not stand to benefit directly. They paraded, gave speeches, wrote articles and letters to the editor, hosted luncheons, and staged at least one ill-advised vaudevillian pageant: all in the service of a cause deemed just and important.

The group’s esprit de corps, as typified by Max Eastman, the organization’s secretary, was thus: “The most excellent achievement of the industrial era is the physical, moral, social and intellectual liberation of women…and no other act will so hasten and certify this next step in the history of life as to give it a political expression and guarantee.”

Throughout The Suffragents, Kroeger takes care to honor women’s work to win the vote over a period of seven decades, above the auxiliary contributions the Men’s League made in the 1910s. Nevertheless, a book touting the men of a women’s movement initially proved a hard sell.

“Quite a few editors did not like this idea,” she says. “Responses came back like, ‘I’d like to work with Brooke but never about this.’ I’m not kidding. Or, ‘Who cares what the men did?’ That was pretty typical.

“Since then,” she says of 2014, when she began pitching the book, “things have moved a little, to where there seems to be, even within feminist circles, more understanding that you need allies. You need powerful allies, and you need influential allies who don’t usurp your voice.”

Once the Men’s League had served the cause of women, it graciously faded away. The men didn’t seek credit or canonization; participation in the organization was rarely referenced in the journals, memoirs, biographies, and obituaries of even its most active members.

As our Kirkus reviewer notes, there are “plenty of subtle lessons in the book for modern-day civil rights activists” in The Suffragents’ portrayal of admirable allyship.

“Part and parcel of doing [allyship] right is that it’s totally forgotten, faded to black,” Kroeger says. “Of course that’s the thing that should happen. They should not have place, yet the model is so fantastic, they deserve place.”

Megan Labrise writes “Field Notes” and features for Kirkus Reviews and is the co-host of the Kirkus podcast, Fully Booked.