Of [More], Life, Susan Brownmiller, Norman Mailer, and The Prisoner of Sex 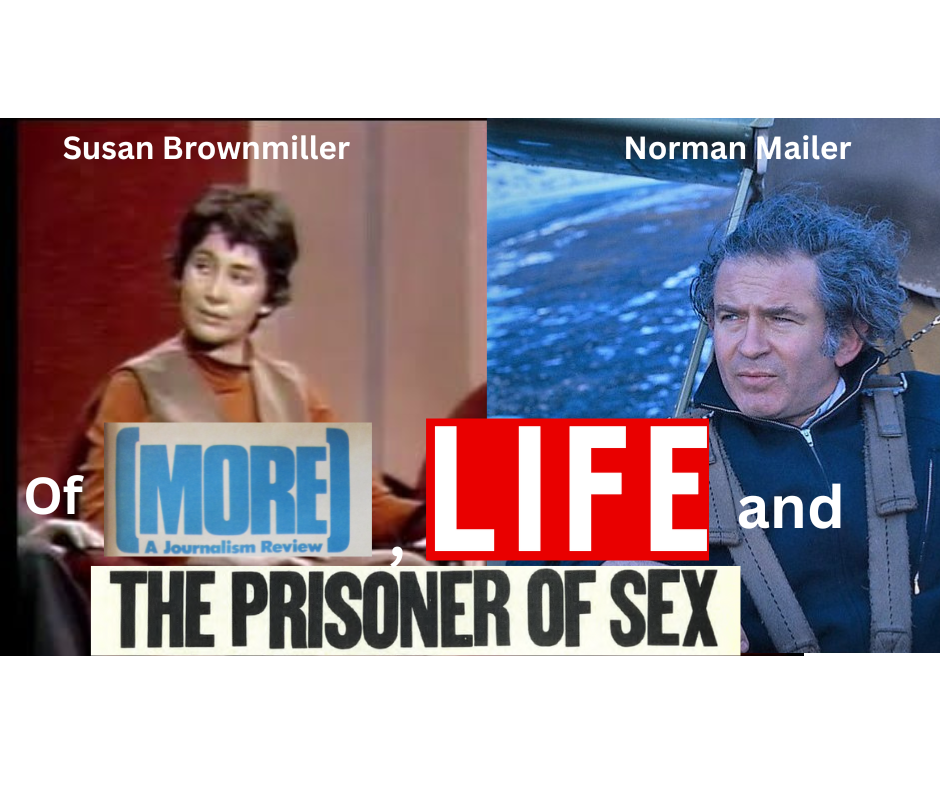 [More]—not more the woman’s magazine, but [More] the feisty short lived monthly journalism review of the early 1970s—produced a perfect power and sexism parable in its October and November issues of 1971, its first two. This telling little fable is not about the actual review of the book version of The Prisoner of Sex, Norman Mailer’s chauvinist battle cry, assigned to the avowed feminist Susan Brownmiller* by Life magazine. No, the issue stemmed from the very decision of Life’s then book editor, David E. Scherman, to give the job to Brownmiller in the first place. As it happened, Mailer’s screed had already caused a collective wail from awakened women everywhere when it appeared in March of that year as the cover story and the entire issue of Harper’s under editor Willie Morris. Mailer also holds the distinction of being the only writer whose piece was permitted to consume all of Harper’s’ editorial pages in a given month for the next 48 years.**

Scherman was the same David Scherman who demonstrated his own feminist credentials during World War II when he teamed up with Lee Miller, schooled her in conflict photography, and, to lasting effect, traded poses with her in Hitler’s bathtub.*** It was more by chance than by design that Scherman offered the Mailer assignment to Brownmiller. As she told him that a book about prostitution that he had asked her to review would not be worth the page space, Scherman happened to mention needing a reviewer for the forthcoming Mailer book and Brownmiller volunteered herself. That gave Scherman pause, but as he thought about the idea more, it seemed not to be a bad one. “Keep it funny,” was the only editorial advice he gave her, which [More] would later assess as evidence of Scherman’s lack of malice in what might otherwise have seemed like a loaded choice. When Brownmiller turned the article in, Scherman seemed pleased. He asked for only one minor insertion—of the name of Kate Millet. A June 18 publication date was set.

The review did not appear in Life’s June 18 issue or the issue of any subsequent week. Brownmiller then passed her typescript to [More], where the editors decided to do some forensics before featuring it on its first cover. They published their mini-investigation as a prologue to her rejected piece. They learned that as soon as Mailer got wind of who was to review his book, he fired a letter off to Scherman with copies to managing editor Ralph Graves and to another editor, Tom Griffiths.  At some point either before or after Mailer’s letter arrived (the Life editors never entirely clarified this, although Graves ultimately settled on before) came Graves’s decision to kill what Brownmiller had written. Scherman was silent on the matter, [More] went on. Griffiths described Mailer’s letter as a “how could you?” Graves explained that to his mind, it was “unfair to sic Ms. Brownmiller on the book” because he did not believe in “assigning automatic friends or automatic enemies to review books.” [More] questioned this assertion, pointing out that Life that very year had Larry King’s friend Marshall Frady review King’s The Confessions of a White Racist and two years earlier had the arch conservative William F. Buckley critique John Kenneth Galbraith’s Ambassador’s Journal.

In [More]’s next issue, Mailer, having by then seen what Brownmiller actually wrote, kept the story going. He wrote to the magazine, declining to refer to Brownmiller with the newly anointed honorific “Ms.” because he considered it to be “on par with such marvelous new English words as Teflon and BIBIAC.”**** However he did say that her piece impressed him as “brilliant, preposterous and charming,” adding for good measure, “Glad I have had my influence.”

Mailer also acknowledged that he had written to Life as soon as he learned who Life’s reviewer for The Prisoner of Sex was going to be. It was a step he said he took with no interest whatsoever in having the review withdrawn, although he did use the occasion to tell Scherman that to have assigned the review to “a member of Women’s Lib” showed judgment “as sound as a rotten sill.”

Cynics, of course, will see dark dimensions in this little drama. As moon-watchers and fight-fanciers know, Mailer is Life’s star high-wire act these days. Moreover, both The Prisoner of Sex and Of a Fire on the Moon were published by Little, Brown, a subsidiary of Time Inc. A lot of commerce there. Maybe even seven figures. Yet surely so high-minded a writer as Norman Mailer would not try and tamper with the editorial integrity of Life; and certainly the editors would not bow to him if he did. The whole thing was probably Ms. Brownmiller’s fault.

With all of that as an introduction, [More] then published Brownmiller’s review in full. This is how it began:

There is something compelling, even romantic, in the image of an aging fighter, weak of leg and soft of paunch, who staggers from his corner at the sound of the bell. But as our hero weaves and jabs, displaying traces of the fancy footwork that made him famous, the picture darkens. The old champ has wandered into the wrong ring. The main event has been scheduled elsewhere. He is, alas, only shadow boxing, and even the audience has gone home.

For sheer bravado, there is much to admire in The Prisoner of Sex, I suppose: Norman Mailer challenging the entire Women’s Liberation Movement to put up its dukes and fight like a man in the stadium of his sexual preoccupations. And what a stadium it is! —built high on a hill of towering conceit with flying buttresses of personal fetish. . . .*****

* As it happened, 1971 was the same year she began the research for what became four years later her feminist classic, Against Our Will: Men, Women and Rape.

** The next piece Harper’s published at such a length was William T. Vollman’s “Keep Going North” in July 2019, according to an accompanying editor’s note.

*** Unlike this story, which had to be cut, the Miller-Scherman Hitler episode, among others involving Miller’s war work, appears in Undaunted.

*****My thanks to Kevin Lerner, whose work on his book Provoking the Press, led to his copy of the inaugural issue of [More], which he generously shared with me. Lerner covers the episode here. Update from Lerner: Internet Archive now has all the issues of [More]. Links provided on the words October and November.