“The Journalist”: In Verse, Mary Clemmer, a Respected, Highly Paid Columnist of the 1870s, Had Lofty Ideas About Journalism But Her Opinons About The Field’s Women and Their Prospects Were Not So Helpful 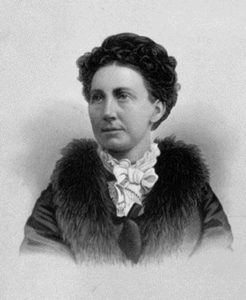 Mary Clemmer, born in 1839, covered the Battle of Harpers Ferry from her kitchen window in 1862, then shed the clergyman husband she had been urged into marrying at seventeen, and went on two years later to become one in a trio of Washington woman columnists—Grace Greenwood and Gail Hamilton, are the other two—who achieved as journalists at the level of their most respected men counterparts in the 1870s and early 1880s. And all three earned even better. Clemmer wrote for the Independent. At her death in August 1884, the Boston Traveller remembered her as “a potent force in the shaping of national issues by their power to influence public opinion” and as someone who “ennobled journalism by her profound conviction of its moral significance.” That said, her well-meant pronouncements on women in the field—what beats should be open to them (never the military or the morgue), what their comportment on the job should be (no pencils or pens lodged in their ears! no invasion of the Senate and House press galleries! no appearances where women would not be treated as ladies!)—did more to harm the pursuit of women for advancement than to help it.

Nonetheless, she was lofty in seeing journalism as a near-sacred calling. She articulated her sentiments in a poem she was asked to craft for the annual meeting of the New York Press Association, held in Utica on June 8, 1881. Dewitt Gray of the Utica Observer recited her ode to the gathering.

Here is what she wrote:

Man of the eager eyes and teeming brain,–

Small is the honor that men dole to thee;

They snatch the fruitage of thy years of pain,–

Devour, yet scorn, the tree

What though the treasure of thy nervous force,

Thy rich vitality of mind and heart,

Goes swiftly down before thy Moloch’s course,–

The Poet,–dallying with his fitful Muse,

On lagging Pegasus, whose halting stride

The Novelist—elate from lofty crest

Of Fiction’s lovely palace of the air—

Looks down and signs: “Only a Journalist!”

My height is his despair.”

The jays minute of feebler Literature—

Who lightly chatter, on its outmost rim,

Of naught but of their small position sure –

Point scornfully at him!

The Statesman—smirched, with pallid malice grim,

Or red with wrath—doth in the morning read

In his recorded deed.

Lo, look for thunder then! His fierce reply

In House or Senate, as he leads the van;

Who takes the daily journal, cool and damp,

And weighs its ceaseless toll on nerve and brain?

Reveals its birth of pain.

Who sums the treasure that it carries hence?

Torn, trampeled under feet, whose counts thy cost,

And ye, the Nameless, best-beloved host!

My heart recalls more than one vanished face,

Struck from the rank of toilers, –early lost,

And leaving not a trace.

Martyrs of News, young martyrs of the Press,–

Princes of giving from largess of brain!

One leaf of laurel, steeped in tenderness,

Though in the Author’s Pantheon no niche obscure

The seeds of Truth ye blew afar are sure

To spring and live at last.

On lonely wastes, within the swarming marts,

In silent dream, in speaking deeds of men,–

Quick with momentum from your deathless hearts,

Your thoughts will live again.

When men crush men amid the thick of strife,–

Bethink thee of one Man, divine, who said,

Yet sweeter ever must be that man’s sleep

Who, still his mother’s boy, prays, lyind down,

His Lord, his soul to keep.

Whate’er our prizes, or how fair our crown

Or deep our losses, only this is best,–

The soul’s great peace. Nor sneer, nor smile, nor frown

Can shake it from the rest.

Exalt thy calling! On its spotless shield

Cravens may clutch thy stars, and thou not yield;

Love them, and hold them fast!

Thus Bowles—unvanquished in a rain of ruth—

Went down in manhood’s flower.

To write the truth we feel.

Defender of the People, of the State,

Kindler and quickener of majestic thought,–

Sure of the finest triumph, thou canst wait

The crown they patience wrought.

To serve thy generation, this thy fate:

But he who loves his kind does, first and late,

A work too great for fame.

(requested and read before the New York Press Association in Utica, June 8, 1881)