To Edgar Allan Poe, This Top Editor Was “A Pretty Little Witch”

In Boston in 1842, not far from where Margaret Fuller was signing herself “F.” as editor of Ralph Waldo Emerson’s The Dial, Cornelia Wells Walter, before she turned thirty, quietly promoted herself from theater critic to editor-in-chief of the Boston Evening Transcript. She replaced her late brother, Lynde Walter, having been his stand-in during his two-year-long illness. The New York Tribune, on July 26, 1842, in reporting Lynde’s death, seemed to think a certain Dr. Palmer had been the interim editor and was next in line, but Cornelia took over, awarding herself a salary to match her brother’s at five hundred dollars a year. There was no known announcement of the shift in leadership, per se, but once the New York Tribune and New York Herald got wind of a woman at the helm, each paper reported the news in brief items. The Herald refrained from offering further comment, but the Tribune added that Walter had “succeeded to the charge of that neatest and sprightliest of papers.”

For women with the luck of marriage or birth lines as convenient as Walter’s, the nepotistic route to top positions would long continue to be the quickest, which is not to diminish her significance in demonstrating that a woman could edit a popular metropolitan daily successfully, which she did for the next five years. 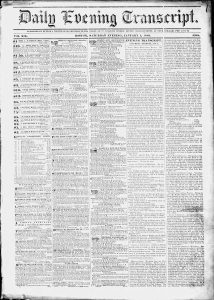 Walter was known for her conservative views, her practice of running the paper from home with rare trips to the office, and for never shying away from controversial topics. Late in 1845, Edgar Allan Poe went after her in his Broadway Journal, irritated that she had panned an appearance of his at the Boston Lyceum. He chided her as “that most beguiling of all beguiling little divinities,” and then dug in the knife:

“We have been looking all over her articles with the aid of a taper to see if we could discover a single syllable of truth in it—and really blush to acknowledge that we cannot. The adorable creature has been telling a parcel of fibs about us by way of revenge for something that we did to Mr. Longfellow (who admires her very much) and for calling her a ‘pretty little witch’ into the bargain.”

In Walter’s case as it would be for so many others, her power post provided no defense against what was not yet called sexism.

In 1847, as Walter married and gave up journalism, she turned the editorship over to her colleague, Epes Sargent. In response to this development, the Baltimore Sun offered some sweet condescension about “the fair editress” and her “popular little sheet,” couching a platitude about  her leadership in her decision to take a husband:

“The idea that he is to enjoy alone the delicate cares and attentions heretofore bestowed upon a whole community, should make him a most happy fellow.”

Cornelia Walter Wells Richards died in 1898 at the age of eighty-five. In place of a proper obituary that might well have acknowledged the ground she broke, Poe’s forty-three-year-old insult seems to have been her only epitaph. 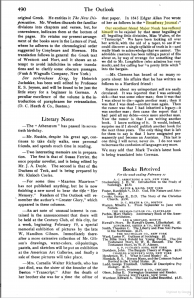 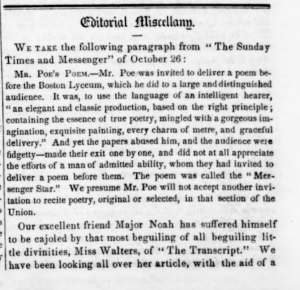 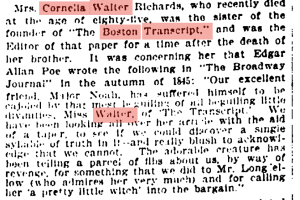